I would like to apologize for abandoning my blog during the last month or so! Please forgive me! You deserve better than that! Much better!

Writing my blog is the highlight of my day. It's that time of day when I think about happy cheerful things to write about...flowers...gardening...antiques....flea markets...you get the picture.

But when I had to force myself to be cheerful and knew I couldn't fake it any more...I had to take a break.

You see, my kitty, Midge Barbies Best Friend (yes, that was her full name...) became ill, then senile, then sadly died. She was a in a lot of pain and very confused for the last 2 months. I had to watch her and take care of her knowing that the end was near.

There were not many very 'cheerful' moments in the last two months to write about.

She passed away on the 16th while I was at work. I knew when I left that morning that it was her last day. I am still very sad about it.

She was my companion for 17 years. She was a found kitty, a solid black runt, from the streets of New York. She fit into the palm of my hand and I tucked her inside my coat on a cold winter day. When I brought her home, she took one look at my big black dog Trixie and they were instant best friends.

She good-naturedly (okay, maybe there was a lot of kicking and screaming) allowed me to move her across the country to Seattle and later to an island in the Puget Sound which she and Trixie explored together. Later we moved to San Francisco, then Berkeley. The two were best pals. We moved back to Washington state and Trixie had a stroke and past away. It was very sad for Midge so I got her a kitty to play with: 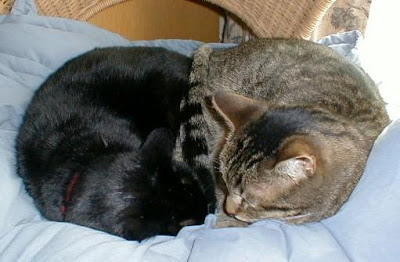 Okay, they were nap buddies. Daisy sort of filled the nap void that Trixie left behind. She was also a bit of an explorer and the two explored the backyard together. They loved to snooze together in the flowers on hot summer days.

When I moved back to Ohio to be closer to my older (they would kill me if I said 'elderly'!) parents, a new little kitty adopted us. She moved onto the back porch and just would not leave. So Olive became part of the family and adored Midge: 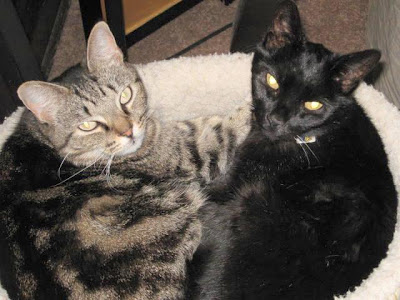 They also became snooze buddies. And explored the backyard together. Olive was the new kid on the block and brought out the playfulness in Midge. Midge showed her the ropes and never hissed at her (unlike Daisy who hisses at everything).

The three of them napping in their own kitty beds near the heat vent: 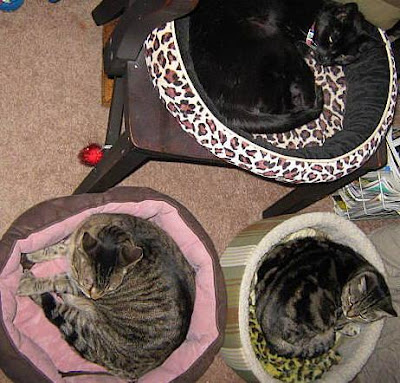 The three of them hanging out on the bed: 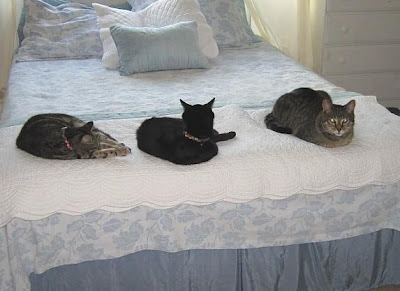 Note the separation of the tabbies. Midge was the peace keeper between them.

It was a somber Christmas this year, as we all missed our Midge kitty. She is buried in the backyard, a place she loved to explore. I planted daffodils and grape hyacinth over her grave and look forward to remembering all the good times with her next spring when they bloom. 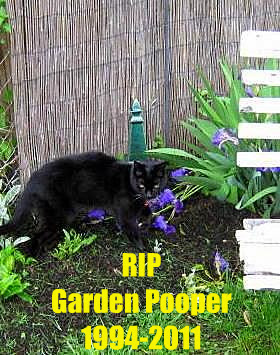 Did I mention she liked to poop in the garden? Yeah, I won't miss those little 'surprises'...or maybe I will...nah.

Thank you for your patience and indulgence! I am back.
Posted by Deb @ Lavender Garden Cottage at 6:23 AM

Email ThisBlogThis!Share to TwitterShare to FacebookShare to Pinterest
Labels: Midge